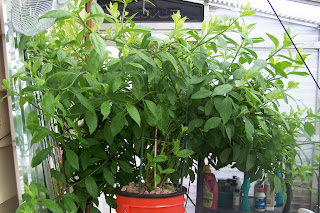 The person who turned-me-on to Gynura is a Type 1 Diabetic who wears the insulin injection pump device; he claims that, since eating the plant's leaves, his insulin requirement has been reduced a considerable amount! Since he now sells the plant, rooted cuttings, cloning equipment, etc., I figured he was just being a typical, good salesman and was trying to sell me his products. Instead of selling however, he offered me several cuttings, along with a sample of his cloning machine, to try to grow the Gynura plant hydroponically - there is no way in hell I could refuse all those freebies! Also, by that time, I was very curious about the plant's properties and if any of the things he told me about it and things I found on the internet soon after our meeting were true.
Looks like there is a great deal of truth to his story, but that is not all: I started munching the leaves (roughly 6 - 7 medium sized a day) about six months ago. It was an easy task, since I was tending to the cuttings and plants in my greenhouse and - since the Gynura plant grows very fast - leaves were soon readily available.
At the time I weighed 220 pounds and basically, mainly because of my obese condition, did not feel very well most of the time. Sometimes I didn't feel like eating that wonderful Dick's Deluxe or McDonald's quarter-pounder with cheese but managed to forge ahead and eat 'em anyhow!

Now, six months later, I weigh 170 pounds naked (I guess there is part of that you don't really need to know) and I feel great! So, what happened? I have to say that I really don't know; all I did was start eating a few leaves and a couple of weeks later my wife mentioned that I looked like I was losing weight. "You talking to me?" I asked. But, at the same time, I did notice that my pants were not as tight and felt better than normal - sort of what a young buck may feel during mating season..
By the way, why is it so hard to find "stretch-waist" jeans for men? Doesn't seem fair... but, screw it, I don't need them anymore anyhow! I went from a very tight 40 to a rather loose 36 and expect to reduce to a 34 waist before long. What a rush this is to me - I haven't weighed 170 since I was in my very early 30's!!

My neighbor is a Type 2 Diabetic and I told him about the plant and it's owner's claims. I had several plants by then and gave a couple to him. A couple of weeks later he, very excitedly told me that his blood sugar got so low that he had to quit taking the pill! That has been about two months ago and he is still off the pill. My wife is eating the leaves as well - I call it bush-munching - and is also losing weight.

So, I think what Mike from Green Harmony - the Gynura guru - told me was true and I also think that the plant has either changed my metabolism, cut my cravings (it has) or both. It has, in fact, made me a lot more regular! From two number 2's a day to 3 or 4, I would say that's considerably more regular, especially for an old guy...

I don't claim that this herb will do anything for you - I know very little about herbs in general, antioxidants, vitamins, nutrients and micro-nutrients, etc. (Sadly, I've always expended more effort towards fixing my Chevy than learning that herbal stuff!) but I truly believe it has helped me lose weight and feel better so - even if it is a "sugar-pill" and it's all in my mind - I just don't give a hoot; I'm gonna continue growing and munchin' the Gynura bush!
Posted by Ron at 9:53 AM

I have some more Gynura procumbens plant that I can sell/trade. If interested pls email me at palengke97@gmail.com. Thanks

Thank you for writing this article.

Gynura is quickly gaining popularity in the United States especially in the Filipino American community.

A new global directory dedicated for Gynura has been launched recently.

I found your article through a search of what happens when you eat GP. I started to grow them and eat 6 leaves daily. True to your article I go to the bathroom more frequently. A plus is my cholesterol levels have greatly improved. Good and bad levels. My body has a time adjusting to raw greens but worth the gas (LOL) Thanks for this article. Its just what I was looking for.